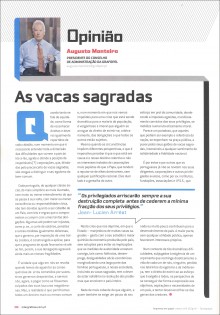 When talking so much about equity as a way of recognizing the equally shared rights and duties of every citizen at a time when it is necessary to realize the full extent of the difficulties which sweep the whole country, the position of respectable (?) corporations hurts and offends us because they are shielded by the prejudice of the sacred cows and are blind to distinguish their selfishness from the common goal.

Every Portuguese of any social class, from the most simple-minded to the most illustrated, with greater or lesser understanding of what is happening around him or with any civic responsibility, has no doubts about what means to be a citizen of a country with laws and rules that commit him to fulfill certain obligations. Some of them can even be unfair, as, for example, the cut in wages, pensions and other equally painful measures that the government is constrained to apply by a creditor troika, in order to be able to reach the end of the financial programme, as their denial could exacerbate our weaknesses even more.

It is true that we get angry when we have to bear the consequences of mistakes made by successive governments and now have to pay for them as if we were guilty of their megalomaniac follies. But the reality is that we all share a more or less common destination and, at a time when we find ourselves thrust into a crisis that is being dramatic for the majority of the population, it is shameful and immoral that someone assumes the right to be arbitrarily exempted from obligations to which all the others are subjected.

Even when circumstances impose different perspectives, it is important to realize that what is at stake is our collective destiny and not the isolated interests of presumptuous corporations that tend to consider themselves “dominant elites” without any rational justification. They are on the one side and the scum on the other.

In this crisis that depresses us and in which the state – manger of the many sacred cows – spends the largest share of the national product, having no solutions to avoid the implications that austerity measures bring with them, such as bankruptcy, unemployment, social and economic inequalities that marginalize a large part of the Portuguese families, our society, including the sacred cows, has the duty to be helpful in the solution of the problems that involve the whole country.

Nobody can be more coward than the one who should give some of his efforts on behalf of the community and who, following his selfish impulses and being clearly convinced of his privileges, engages himself in an ethically immoral fight.

It seems to be a paradox that those who could be an example and a reference of the nation present themselves in the public square showing their importance as sacred cows, insensitive to any feeling of national solidarity and loyalty.

That is why the Portuguese no longer see themselves mirrored in their leaders, corporations and privileged groups, such as institutions, foundations, associations and private institutions of social solidarity that nothing or very little contribute to the development of the country. Most of them, without any public utility, only support their own interests.

In the context of such dramatic difficulties, subjugated to the requirement of a budget that drastically restricts everyone’s life, nobody, lost in the labyrinths of selfishness and indifference, has the right to evade the effort that is required to all of us in the perspective to be able to give form and expression to the targets, aspirations and needs of a country trying to get free from the creditors’ clutches.