Companies and football – what parallelism? 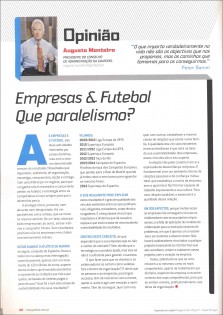 Companies and football are two activities motivated by different things but having the same common denominator, namely the results!

Results rely mainly on organization, strategy, commitment, action and devotion. But there is a difference. In business, one can win without the competitor loses but in football the strategy between competitors is to fight hard until the opponent loses.

So the analogy is neither absurd nor maladjusted. There is a parallelism between both. One wants to achieve business success and the other to win and get trophies. Without positive results there are no companies or clubs.

Since Athletic Madrid won the Spanish League the following question has always been in my head: how was it possible with a budget of only 120 million euro to defeat other clubs whose budget is three or four times higher and have superstars paid their weight in gold? What was and has been the basis of sustainability of its results?

What can really explain these results is the quality of the links between pros, managers, coaches, staff and players. Strong links drive the dynamics that give cohesion to the team and are the basis of an excellent sustainability of results.

What makes your business be the best on the market? Undoubtedly technology or the product help, but they are not enough to ensure success.

What can be done to make customers and employees feel like superstars inside and outside the organization? It is obvious that to be successful people and companies have to use their mind, appeal to reason and act with emotion and feeling. They have to be able to establish with everyone the same kind of relationship that exists in a family. The quality of the family ties is the basis of their sustainability. In the companies these links are their support.

The relationship cannot be the expression of reciprocal mistrust. It is crucial to create an internal atmosphere of personal relationship and of mutual trust without which it is not easy to form work teams that express their culture. The quality of this relationship is essential to a healthy atmosphere.

One of the aspects why the companies often cannot link the employees to their business projects is the fact that they do not apply models of collaboration to solve the problems together. It is only one who solves them and the others say amen.

Employees will not be tied to any business project if they do not believe in that project and do not work with the heart in the company.

Everyone, especially the ones who consider themselves as the most competent, apart from working for money, expect the company’s recognition of their skills to make them feel professionally visible in the eyes of the organization.