Who can be trusted? 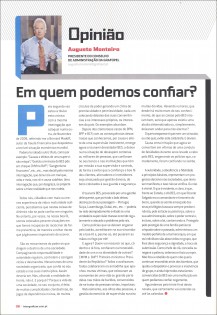 For the second time I am giving a chronicle the same title I had put to another one, of November 2009, referring to Bernard Madoff, the author of the financial fraud that triggered the terrible global economic situation.

I could have thought of another title, for example, Causes and effects of a shortsighted supervision, Criminal management of Bank Espírito Santo discredits the Commission for the Securities Market and the Bank of Portugal, Financial Gangsterism, etc., etc., etc. but I decided to use the same question which denounces an evil that now and then gnaws us and makes us shiver. It is a question that, unfortunately, is projected on the sad reality around us.

We all, citizens with more or less life experience and sufficient maturity, realize that what concerns money nobody can be trusted. However, sometimes, in our good faith, we are put in situations in which we were unable to reason in a preventive manner, in order to avoid risks we thought impossible to occur.

The mechanisms of power drive the fate of a society. Holding together responsibility and authority, they regulate, control and correct vices and excesses. They are the mechanism of an organized society that trusts its state and institutions. So it should be. But, facing reality, it is not. And why is it like this?  Because the life of a society, in its whole, is made of many clandestine complicities, of games of mutual dependence, of many circles of power, generating a climate of permissiveness and promiscuity, each one putting the interests of the country under their own expediencies and interests. Examples exist in large numbers. After the sensational cases of BPN, BPP and BCP with the disastrous consequences we know as cause and effect of a non-existent supervision, now the devastating BES tsunami emerges, leaving hundreds or thousands of people in a desperate situation, people who trusted their bank and the institutions whose mission is to supervise and control them, in order to prevent that the confidence and good faith of the clients, savers and investors is betrayed by mismanagement of assets placed under their custody and security.

Tsunami BES caused by a delinquent management that everywhere left wreckage of its passage – in Portugal, Switzerland, Luxembourg, Dubai, etc., etc. – could have been avoided in time if a real supervision had occurred regularly and the problem had been attacked by its root.

Like policemen who are fooled by a thief, they believed in his sincerity and good faith and, astonishingly, even put the hands in the fire for him!

And now who will compensate those who, here and abroad, trusted the integrity of some people and the trustworthiness of others? Will it be The Commission for the Securities Market and the Bank of Portugal or The Prime Minister and the President of the Republic? All have endorsed it. All of them have collaborated in the trap that caught lots of victims who had put the savings of a whole life or most of them in the hands of crooks, thinking that they were serious, unpolluted people.

Of course in people’s eyes the management of the surveillance exercise raises many doubts. There were rumours that already for a long time things at BES had not been going well. Was it only a systematic apathy or they simply did nothing not to alarm people?

What is thought is that nobody was able or did not want to avoid this catastrophe. And they should. We get annoyed seeing that now they are becoming the victims of a behaviour based on lies carried out by BES for years, cheating the policemen who, comfortably, have trusted the thief.

The authority, obedience and fidelity to basic principles represent a decisive progress which should be obvious in societies. However, this does not happen or is not visible. What is evident and clear is that BES clan, whose captain and steersman was Ricardo Salgado, when they felt that their privileges were being threatened, have always sought predominance, by cunning or force, over their board, the central power and even the law, bypassing it. Protected by the prestige of a patriarchal family, Ricardo Salgado ran the perfect model of a hierarchy in which individuals are absorbed in the group that gives them security and dignity in exchange for their submission. Being the head of the clan, he allowed or denied them to speak, gave orders and made them be fulfilled. If those who did not want to continue hiding behind the screens had not rebelled, helping to start and cause the insolvency of the group, today we would all be still convinced that BES was an institution we could trust blindly.

Let us wait for the end of the novel that will surely happen only many years from now.