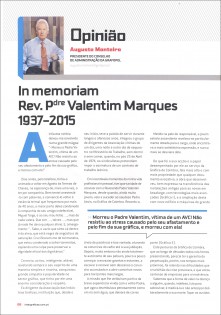 The terrible news caused me great sorrow, “Father Valentim died of a stroke! He did not resist the stress brought about by his withdrawal and the end of his printing company, dying with it!”

Some days before, in a phone call, I had encouraged him to go again to Termas de Chaves in August, hoping to enjoy his company once more. I tried to persuade him to return to the spa of hydropathy he had attended for more than 40 years, most of them with his unfailing friend, Miguel Torga, and his bad temper … but it was good for nothing. Yes…maybe…but nothing gave him any relief. And he said bitterly,” you know, the emptiness I feel comes from the heart that is full of anguish and saturation. They crucified me so terribly that I am condemned to suffer torments, paying for an innocent guilt to preserve the respect of the official dignitaries”.

Being correct, active, intelligent, kind, always revealing his mind in a simple and cheerful way, he got great thoughtfulness and popularity among the printers who had a huge consideration and esteem for him.

Former head of the Printing Industries Association, an institution that since its beginning, he has passionately served for long and laborious years, he integrated the group of leaders of the Association who were victims of two days and a night of sequestration in the Ministry of Labour, without sleeping and eating when after the 25th of April, 1974, union members wanted to impose them the signing of an uneven work contract.

In countless moments of my professional and personal life I had the opportunity to be on good terms with Reverend Father Valentim Marques when, still very young, he succeeded Father Assis of good memory in Coimbra Printing Company. I remember him full of patience and good will putting up with the pigheadedness of the old man until he retired. Later on, though not fully autonomous in his sector, little by little, he began emptying drawers and shelves, tirelessly digging and renewing the accumulated rubbish to open new ways that led to wider horizons.

The mission assigned to him was based on the brief experience lived with the old priest who now wandered painfully like a river that had stopped flowing, because it had no water.

Showing all his responsibility, the young rising star turned out to be particularly fit for that job, where he found the greatest satisfaction, never more leaving it.

The work he developed, well expressed in the transfer of the old facilities to the new ones in Assafarge with more advanced technologies (Printing Company I) and their expansion to a new building with large-sized machines (Printing Company II) shows   more properly than any evocative document what has been his action and the role played by him in the service of Coimbra Printing Company.

The route of this company witnessed by all of us along decades seemed to have the guarantee of being eternal, however, in the nearest times it was affected by the difficulties provoked by the crisis, which threw hundreds of firms into bankruptcy.

We know that the way to help someone who, being very ill, struggles to survive is to medicate him and not deliberately anticipate his death. To close one’s ears to the patient’s pleas is an irreparable attitude: it means to let someone die without assistance … without any sign of appreciation for him who is fighting to preserve life. It seems that we are happy seeing his bad luck.

In our last phone call he told me, ‘I live in the fear of being accused before the community I have served my whole life’.

Sensitive to the disguises of those who looked askance at him, demarcated of his weakness or pretending to be complacent, he gave vent to his feelings brokenhearted, ‘In the night my thoughts make my hours of insomnia and nightmares distressing. This tragic end of mine gets worse day after day, looking like a God’s curse.

I believe that he died desperate for not having been able to do anything and convinced that his whole effort of a lifetime devoted to the church had been in vain.

‘But,’ he told me, ’life is like that. First I was welcome and five decades later I became unwanted. And he confessed, ‘Before leaving I have never failed to comply with the company workers and with the suppliers and banks as timely as possible. It is true that we were struggling financially but we had already planned to capitalize the firm. However, the opinion of most people in the institution was different. They wanted the end of the company. From then on there have been disappointments after disappointments because of the scruples or weakness of some of them.’

I asked,’ Has all this to do with your personal relationship with the top head of the hierarchy’?

‘It is obvious that we are not crazy about each other and in view of this I lost ground, having to accept the opinion of my boss.’ And he went on,’ There are people who do not like to stumble on any obstacle, as if all roads had to be straightforward. In an unyielding obstinacy they refuse to show solidarity in hard times. They prefer to stand aside.’ And he concluded with grief,’ Ignoring a valuable endowment and underselling it shows that someone gave up faith, without hope of resurrection. I expect that remorse does not turn his life into a hell.’

To die with dignity is everyone’s ultimate aspiration. The respect and deep reverence for the old priest could and should have had an exemplary attitude of the institution, giving him that right up to his last days, but it seems that he has not deserved it.

The funeral ceremony, according to the bishop´s agenda, was scheduled for 2o’clock pm, which prevented many people to be present to bid farewell to the priest, as well as to the man and friend.

Peace to his soul.

P.S. In this In Memoriam it is not my purpose to be a judge in someone else’s trial. I only expressed, not exactly in the same fearless words of his speech which opened his soul with no disguises but using words of the same meaning to show the sorrow, anguish, frustration, powerlessness, resentment and pain that made him suffer in an abandoned despair.

Although I am sure that I have fulfilled my duty to a loyal friend, my critical mind tells me not to interfere in the matter because only who is inside the problems knows what has really happened. So let their own conscience be their judge them.