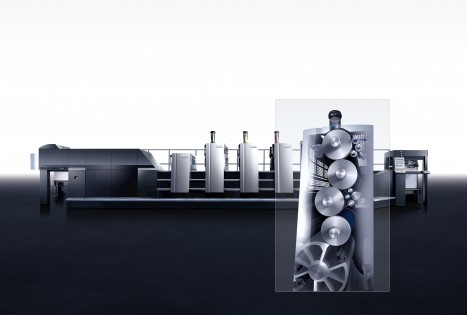 Series production of the Speedmaster XL 75 Anicolor from Heidelberg began in Wiesloch-Walldorf at the start of this year.

After the Anicolor zoneless short inking unit proved so successful in the 30 x 50 centimeter (13.78 x 19.69 inch) format for short and very short runs, Heidelberger Druckmaschinen AG (Heidelberg) extended this technology to the 50 x 70 centimeter (19.69 x 27.56 inch) format. The Speedmaster XL 75 Anicolor made its debut at drupa 2012 and successfully passed field tests involving commercial and packaging printers. Thanks to stable inking-up from the outset, a new print job is inked up after just 20 to 30 startup sheets. This cuts paper waste by as much as 90 percent and also boosts environmental performance significantly.

The Speedmaster SX 52 and XL 75 Anicolor models and Linoprint C 751 and C 901 digital printing systems offer customers an extensive portfolio for cost-effective production of very short runs and personalized print products. They can combine the highly productive offset technology with the digital printing systems to meet the needs of their business model.

Medium-format press in demand among commercial and packaging printers

Demonstrations at Print Media Center in Heidelberg and in the U.S.

Existing and prospective customers will be able to see the benefits of the Speedmaster XL 75 Anicolor for themselves at various events in the future. The press is now ready for demonstrations at the Print Media Center in Heidelberg and will also be a focal point of the Info Day on “Special applications in commercial printing” taking place in mid-March.

In Heidelberg USA’s North American Print and Packaging Technology Center in Atlanta, the press is installed and ready for demonstrations upon request.