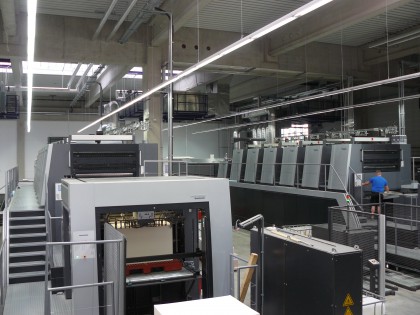 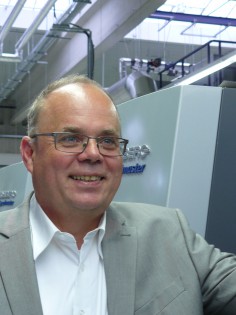 The construction work created an additional 5,000 square meters of space and the flow of goods was completely redesigned based on the lean principle. Production is now organized efficiently with two new large, format 6 presses from Heidelberg, a folding carton gluing machine, and three die cutters in a fully integrated Prinect workflow – a solution that is unique within the industry. In the first five months of the year, this resulted in a 10 percent increase in throughput despite the ongoing construction and installation work.

Around 80 percent of HEPACK’s production is accounted for by food and confectionery manufacturers with production sites in Germany and neighboring countries, and approximately a fifth of its contracts fall under the general packaging segment. Its customers include companies such as Unilever, Dr. Oetker, and Südsalz.

In addition to requesting production that is appropriate to use with foodstuffs, customers are making increasing demands when it comes to finishing the products. This includes a growing number of foil finishes, with gold foil particularly popular for confectionery packaging. The proportion of spot coatings with UV varnish is also growing.

“We opted for Heidelberg because the Prinect workflow and the ability to link it to our ERP system was the only way to take the complete integration of our redesigned production to a new level of performance,” says Peter Heim, Managing Director and owner of HEPACK. The link with the ERP system ensures that all the relevant data is accessible centrally at all times and can be used to further optimize processes.

The decision to opt for the two Speedmaster XL 145-6+L presses from Heidelberg was based primarily on their high level of automation and a throughput of up to 18,000 sheets per hour. The presses’ mechanical stability and smooth running were also very much in their favor. What’s more, one of the two presses is equipped with a hybrid coating unit so it can produce UV coatings, too. “When printing in large volumes, consistently high speed, availability, and quality are the most crucial factors. Thanks to the Prinect Inpress Control inline measuring and control system, we can control print quality at any press speed, thus saving time and boosting productivity.” Heim has also worked with Heidelberg to address logistical processes within the company. The two presses were integrated into an automated pallet supply process, thus increasing efficiency, ensuring seamless workflows, and relieving the pressure on staff.

The final elements in this investment package were a Diana X115 folding carton gluing machine and three Dymatrix 145 die cutters.

By working with Heidelberg to redesign and restructure its production operations, HEPACK has also done much to optimize the energy balance of its folding carton production. An idea proposed by Heidelberg made it possible to implement the concept of using waste heat from the presses and additional warm air from a wood-chip heating system and a cogeneration plant to preheat the process air for drying the print sheets. Cardboard is delivered to HEPACK on single-use wooden pallets, with a throughput of around 28,000 metric tons annually. The pallets are now processed to make wood chips for burning, reducing energy consumption in the print area by approximately 30 percent. The additional gas cogeneration plant also heats the production hall in winter. The technical outlay and installation of the wood-chip system pays dividends for the environment on a daily basis, with HEPACK saving around 100 kW per operating hour and press.