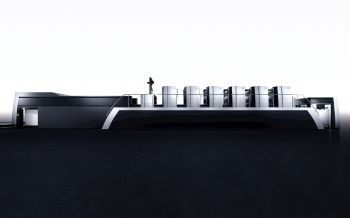 Heidelberger Druckmaschinen AG (Heidelberg) will be unveiling two new large-format presses at drupa 2008. The Speedmaster XL 145 and the Speedmaster XL 162 are the ideal complement to the upper end of the Heidelberg sheetfed offset portfolio. The presses have been designed primarily for use in the packaging printing and industrial publishing sectors. This new generation of presses offers customers outstanding advantages in terms of user-friendliness, makeready times, high plate throughput, and synchronous washup processes. This enables productivity increases of up to 20 percent over similar presses. The 102 x 142 centimeter (40.16 x 55.91 inch) and 120 x 162 centimeter (47.24 x 63.78 inch) formats being offered cover more than 75 percent of the entire large-format market. Due to growing levels of industrialization and the pressure this puts on companies to streamline operations, this segment has become a key sector. This has made the large-format press a particularly attractive product for Heidelberg.

The introduction of a range of innovative components, such as CtP, has provided the stimulus for the continued development of the large-format press segment. These components are now fully developed. The designs of these Heidelberg presses take full advantage of the company’s extensive experience in the sheetfed offset sector, which includes key features such as the extensive automation and fast print speeds boasted by the new generation of Speedmaster XL 105 presses. Short makeready times and high production speeds are all part of the package. The impressive levels of automation built into the presses mean that fewer operating personnel are needed. This new product family also boasts digital control systems and integration into Prinect.

The required substrates, inks, coatings, blankets, and washup and cleaning agents are now all available in the right quality.

The new large-format presses have been designed to meet the specific requirements of the packaging printing sector. The new portfolio extends the Heidelberg one-stop supplier concept for folding carton production - with prepress, press, and postpress solutions all being supplied from a single source. The 102 x 142 centimter format of the Speedmaster XL 145 press is currently the most popular format in the packaging printing sector. Analyses carried out by Heidelberg show that the three-centimeter (1.18 inch) larger print sheet of the Speedmaster XL 145 (106 x 145 centimeters or 41.73 x 57.09 inches) delivers ten percent more space for nesting individual repeats on the sheet. The packaging printing sector is also making increasing use of the 120 x 162 centimeter format - the format of the new Speedmaster XL 162. The 120 x 162 centimeter format already dominates the publishing sector. Both presses are manufactured on a standardized platform. Heidelberg has been operating successfully in the packaging sector for many years. For example, almost 50 percent of all the 70 x 100 centimeter (27.56 x 39.37 inch) format presses used by packaging printers in Germany come from Heidelberg.

The workmanship, durability, and print quality of the new presses match the Heidelberg standards that customers have come to expect. Several configurations will be available for processing substrates ranging from 0.06 to 1.6 millimeters (0.0024 to 0.063 inch). Both presses will be capable of operating at a production speed of up to 15,000 sheets per hour. As with all presses, this maximum print speed is determined by a range of parameters. The most important of these include the quality of the materials, substrates, inks, and coatings used, as well as the temperature and humidity.

End-to-end solution for the entire value-added chain in the packaging sector available immediately upon launch drupa will also see Heidelberg launch new prepress equipment in the form of the Suprasetter 145 and 162 CtP units. Heidelberg will also be offering a Suprasetter 190 - a solution designed for customers who work with other makes of press in formats larger than 120 x 162 centimeters. Data from the prepress systems of other manufacturers can be transferred to the Suprasetter via the Prinect MetaShooter. As with all other products in the Suprasetter series, the Suprasetter 145, 162, and 190 have been developed entirely in-house by Heidelberg.